A good first step in taking charge of your sexual health is to know your body and know how it works.

The female reproductive system is a series of orifices (openings) for intake and output through tubes and passages. The interior part of the system performs the most important functions, and the exterior acts as a cover to protect the delicate interior organs. 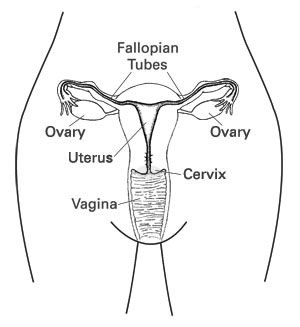 The ovaries are small, oval-shaped glands that are located on either side of the uterus (womb). The ovaries produce eggs and hormones.

Narrow tubes that are attached to the upper part of the uterus and serve as tunnels for the ova (egg cells) to travel from the ovaries to the uterus. Conception, the fertilization of an egg by a sperm, normally occurs in the fallopian tubes. The fertilized egg then moves to the uterus, where it implants to the uterine wall.

The uterus is a hollow, pear-shaped organ that is the home to a developing fetus. The uterus is divided into two parts: the cervix, which is the lower part that opens into the vagina, and the main body of the uterus, called the corpus. The corpus can easily expand to hold a developing baby.

The is a canal that joins the cervix (the lower part of the uterus) to the outside of the body. Its exterior opening enables sperm to enter the system to reach an egg. If an egg is not fertilized, menstruation results and the blood is carried out of the body through the vagina. It also provides a way for a baby to exit the body. That’s why it’s sometimes referred to as the birth canal.

Although most of the male reproductive organs are external, it’s important to understand how all your sex organs—external and internal—work together.

The penis is the most visible part of the male sexual anatomy. It is made up of two parts, the shaft and the glans (also called the head). When a male reaches sexual climax, he ejaculates a thick fluid (semen) through the urethral opening at the tip of the penis into the vagina. The semen carries sperm cells through the vaginal canal to the uterus where the sperm seek out the female egg for fertilization. Also, when a man urinates, the flow leaves his body through the urethral opening.

The testicles are located below the penis and begin producing male sex cells called sperm and testosterone, the male sex hormone after puberty.